Kon Tum is the capital town of Kon Tum Province in Vietnam. It is located inland in the Central Highlands region of Vietnam, near the borders with Laos and Cambodia.

Kon Tum has several vestiges of the French colonial period, as well as several tribal villages directly in the suburbs of the Vietnamese-reconstructed town. Among the town's landmarks, there is a Roman Catholic wooden church on discrete stilts and a large French-built seminary which hosts a small museum on local hill tribes. French missionary presence in Kon Tum traces back to 1851. 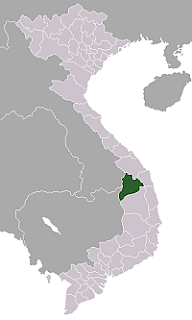